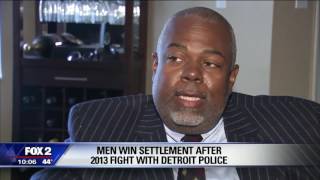 Brothers Who were Arrested for Fighting Back Against Violent Cops — Beat Charges, Win Settlement

Southfield, MI — Two men went from being arrested and facing felony charges to being released, cleared of all charges, and now, given a six-figure settlement — after getting into a restaurant brawl with two belligerent Detroit cops. Tywonn Mitchell, 20, and Naybon Moore, 26, were driving to Grandy’s Coney Island back in May of 2013 when they were followed into the parking lot by two Detroit cops. Having done nothing illegal and knowing their rights, the two men thought litt

How to Become a Millionaire in 3 Years or Less?

Click Here for the 67 Steps To Getting Anything You Want Out Of Life: Health, Wealth, Love, & Happiness